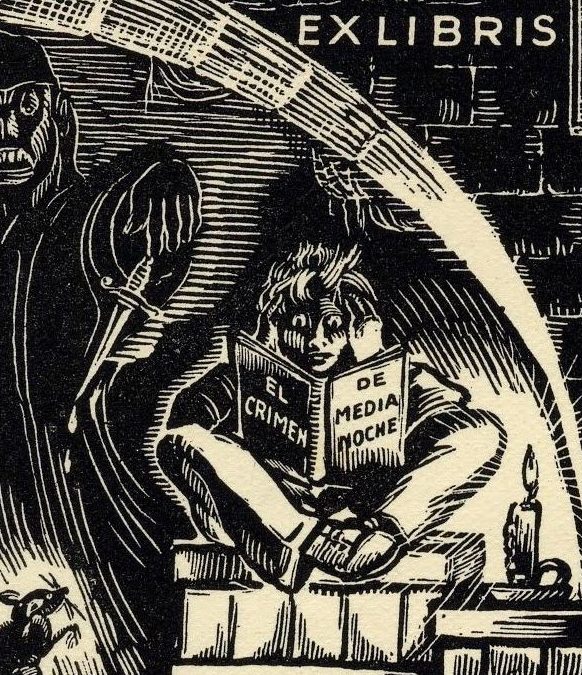 ex libris is the expression for „a book owner’s identification label that is usually pasted to the inside front cover of a book“ (Merriam Webster).

Ex Libris is also the cleverly chosen name of a book project by Simon Groth for which he’s looking for crowdfunding (only 8 days left, hurry if you want a copy, you can use the platform pozible as a guest – no account necessary). Ex Libris will contain twelve chapters that can be read in any order which leads to a billion different story versions. Each copy of the book will be an individual version and just by comparison of other Ex Libris-books you’ll learn the differences.

What is the story about Simon?
The form of the book and the story kind of feed off each other.
It’s set in a hyper-networked surveillance state, where a small band of subversives calling themselves the ‘free readers’ has been quietly attempting to rebuild a library from the fragments and scraps of old books that have survived. In the process, they have built an elaborate and formidable organisation away from the otherwise ubiquitous eyes of the feared ‘committee for public safety’. 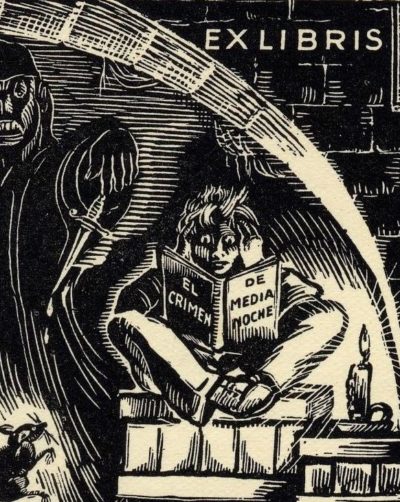 It’s the story of four people drawn to the free readers variously by circumstance, romance, force, and curiosity. Dock dreams of relief. Inkle is looking for trouble. High seeks enlightenment. And Trace is chasing a legacy of written stories passed down to her by her grandfather before he was ‘erased’ by the authorities.
I would call it part dystopia, part satire, with doses of paranoia and farce, and a self-reflexive bent.
I asked my editor what she thought the story was about in the broader sense and she said it was about the truths we choose to believe in the face of lies and the lengths we will go reclaim stories that have been taken from us. Which is a much more elegant way of putting it.

What about the format of Ex Libris?

A few writers in the 1960s experimented with order and storytelling in this kind of way, most notable B. S. Johnson in 1969 published The Unfortunates as booklets held in a box. I wanted to play with similar ideas, but focus on the narrative itself, design a structure that as much as possible retains a sense of narrative arc. That took a really long time to figure out and I had to throw away three previous drafts (one of them complete) in the process.
Plus I wanted to use digital print technology to make it a seamless reading experience. Rather than a book in a box, I wanted it to look and feel and read (mostly) like a regular book. The big reveal only happens when you compare it to another copy.

What are the challenges of writing Ex Libris?

There are fixed chapters at the beginning and end to help frame the story, but the ‘fluid’ chapters I didn’t write the story in any particular order. I jumped around and worked on different chapters at various times. I kept a kind of storyboard in Scrivener, detailed chapter outlines in dot points, and used it to track the big picture stuff and ensure that each chapter revealed something new about a character or the world they live in. I wrote the manuscript itself in Word, each chapter in a separate document. For me there is no true version of the story.
I’ve tried reading a few different versions of it from start to finish, but it’s difficult for me because I’m so familiar with the details. I really have to rely on others to know if the story works or not (so far so good). My editor and I will at some point sit down with a few versions and critique them.
So in that sense, I don’t really have a ‘favourite’ version. I know the rough chronology of the chapters (though it’s only rough, there’s no way to construct a pure chronology) and I like the idea of certain parts of the story being revealed before others, but I’ve avoided getting too involved in that. I’ve worked almost exclusively regarding each chapter as its own miniature arc and refining the story at that level, avoiding room much repetition, trusting that the pieces fit together.
I like to think of it like a jigsaw puzzle. The picture at the end is the same, but the journey towards it is different depending on the order in which you put the pieces down.

Could Ex Libris work in other media and if so: how?

I hadn’t really thought about it. I imagine you could create an audio playlist on shuffle. You could do something similar with video too. But how you ensure these are truly randomised and that they never acquire a standard or ‘canonical’ version? That I don’t know.
One thing I like about printing and creating bespoke ebooks is each reader gets their own version that stays the same. It’s your copy of the story that no one else has. I really like that, probably more than having it in a format where you can make any version or that changes with each retelling.

Do you think this way of storytelling would work with any kind of story?

Do you have an idea who’ll love Ex Libris?

Other writers, mostly. I think it’s sparked the imagination of a lot of the writers I’ve been in touch with and it’s a very ‘writerly’ kind of thing and it piques the curiosity of people who tell stories, who immediately trying to imagine how it’s done.
But then there’s also been interest from regular readers too, drawn variously by the gimmick of the structure or sometimes the story itself.
I like the idea that, one day, someone will pick up a copy of Ex Libris without any clue as to how it was made, read it from cover to cover and enjoy it. I like the idea that you can engage with it like any regular book, but there’s a whole new layer to the story if you want to go out and find it.
I’m already thinking about ways I can enable readers of Ex Libris to seek each other out once the book is ready. But there’s a lot of work that needs to happen before then.