Is It Really Transmedia?? And what is transmedia anyway? 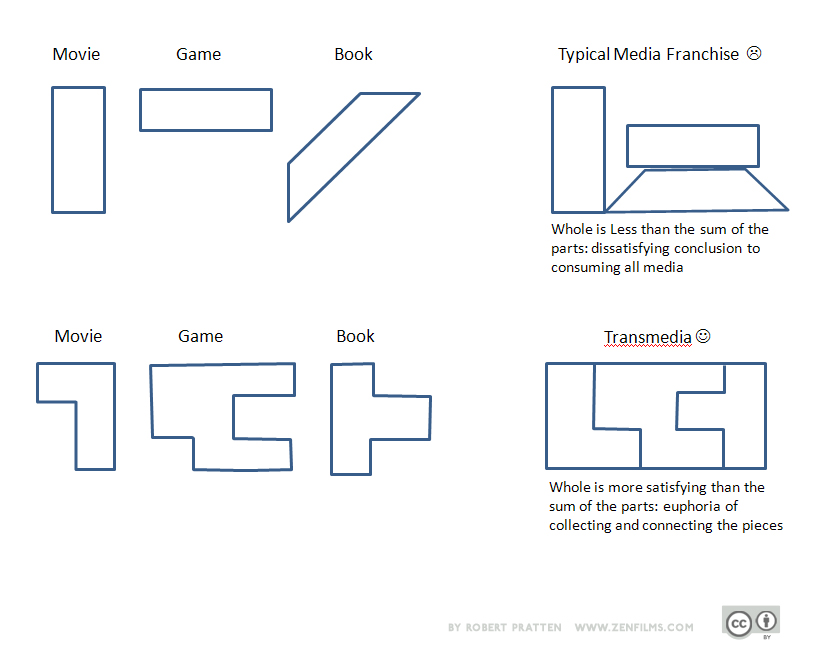 The term transmedia startet to pop up in the nineties and then Henry Jenkins book „Convergence Cultures“ made it popular (he mentioned it first in an article for Technology Review). The co-founder and former director of MIT Comparative Media Studies Program defines transmedia storytelling like that:

Transmedia storytelling represents a process where integral elements of a fiction get dispersed systematically across multiple delivery channels for the purpose of creating a unified and coordinated entertainment experience. Ideally, each medium makes it own unique contribution to the unfolding of the story. (Henry Jenkins)

Is It Really Transmedia?? by Steve Peters

This chart is really helpful and well thought of but there’s one point I don’t understand. How do you define a „story universe“? Isn’t a story universe, the „storyverse“, „in which all of the components of transmedia storytelling take place“ (transmediaCollective).  It’s hard to differ between „entertainment franchise“ and a genuine transmedia story. Building a story world around the one story I want to tell, seemed to be transmedia – and not franchising. So, I’m still thinking about this definition (and the „multiple vs. one story“ point) and stick to Brian Clarks Facebook-post „Reclaiming transmedia storyteller„:

The tone of that conversation began to sour after Jeff Gomez worked to establish a „transmedia producers credit“ at the Producer’s Guild of America, which cemented a definition of qualifying work that is confusing at best and exclusionary at worst. One of its core flaws (IMHO) is that it abandons Jenkin’s distinction of „it isn’t just adaptation“ – in fact, the credit definition talks about „3 or more storylines“ because in the Hollywood system, the transmedia is almost always a bolt-on adaptation of a primary IP that the producers don’t get to influence. I understand why it is what it is, and in general don’t find it massively relevant (it’s the requirements to get into PGA, not to be a transmedia producer), but it has sparked passions.

He divides into East Coast and West Coast „transmedia thinking schools“ which helps me a lot to get the differences:

At the same time, I’d been spending a lot of time thinking about this division through the lens of my long relationship with the independent film community and saw many similarities. In conversations, I started calling it East Coast and West Coast and pointing out that maybe transmedia was salvageable if it was a big enough bucket to include two radically different visions of what it was about instead of all agreeing to do it just one way.

The West Coast transmedia tradition is largely what Jenkins was studying, and that style might be best personified by people like Elan Lee, Jordan Weisman and Jeff Gomez. It thinks more in terms of franchises, it has struggles with the relationships with the owners of the industry, and starts from the perspective that creators won’t own the IP they are creating. They want to fix the studio system, or recreate a new kind of studio.

The East Coast transmedia tradition is quite different and emerges far more from the independent traditions of media through people like Lance Weiler, Michael Monello, and I. It thinks in terms of one story told across platforms, it has struggles with monetizing and financing, and starts from the perspective that creators own the IP they are creating. They want to extend an existing community into transmedia, or recreate a new kind of community.

Neither is wrong. Few practitioners or creators work exclusively in one sphere or the other. One is not more noble or pure or profitable than the other. But we’re all guilty of conflating the two together in ways that lead to moments where it might sound like the community is, for example, telling documentary filmmakers that they need to think more like franchisers if they want to get on the transmedia bandwagon and not be left behind as „storytelling changes forever.“

Another important point in his argumentation is the question if you have creative control over the story. Are you the primary storyteller, do you own the intellectual property? Not so interesting though is „the idea of drawing a line between „extending the story“ and „marketing““ which „is antiquated at best“ as Frank Rose pointed out in his great article „What Wagner can teach us about storytelling in the internet age„.

TRANSMEDIA STORYTELLING VERSUS ITS METHODS

Here’s what gets me excited about this distinction: it illuminates what we have in common by looking at the different ways we work by separating the issue of creative control from the issue of ownership. Mike didn’t cease to be the transmedia storyteller of “Blair Witch” when the sold the rights to Artisan, because he was still among the primary storytellers with creative control. Conversely, Gregg Hale and David Goyer were definitely transmedia storytellers of “Freakylinks” even though it was a Fox Television production … up until the moment they lost control of the television show (then they were just using the methods.)

Sometimes that knife also cuts in surprising ways that we think raise interesting debates that we haven’t fully explored yet. For example: if you’re working for an entertainment IP you’ll tend to have less creative control than if you work for a non-IP brand. Mike and I think, for example, that “The Art of the Heist” represents transmedia storytelling and not just its methods, even though it was a work-for-hire creation at an ad agency’s request. Audi didn’t have an existing IP that it was asking to have adapted or extended, it was asking for a new story utilizing multiple channels and we were among the central group of storytellers creating that.

We aren’t just inventing this from whole cloth, either: those of you that have had any art theory will recognize the same distinction as “art versus craft,” which has been deeply useful for creators in every other form for discussing the act of creation. […]

If creative control is the unifying goal, then we should reserve the phrases “transmedia story” and “transmedia storyteller” to when it passes some tipping point towards having an important creative voice in the core story rather than just when someone has helped adapt or extend someone else’s story onto a new platform. And I say that as someone who frequently is adapting or extending someone else’s story … or whispering in the ear of the primary storytellers about the things they could do as storytellers beyond just extending and adapting.